Over the Garden Wall Wiki

What's on your mind?

Wirt and greg go to woods to save beatrice. And, they meet woodsman there. Wirt thinks that he, holding a lantern, is the "beast" that the tavern people said. So he kicked the lantern from the woodman's hand, and the lantern fell on the ground and the light went out. The light seems to be related to the beast's life. But in the next scene, even though the light was once turned off, he talks casually to the woodsman who lit the lantern again. Obviously, in the last episode, when the woodsman extinguished the lantern, he screamed and faced the end (maybe? Although his exact life and death are unknown.) But it's a little strange that nothing happened in episode 4. What's the reason? Is it a set-up conflict? hmm... well, this is just my opinion, when the lantern fell to the ground, there was still a spark left, so he almost died, but he survived. Since the nearby edelwood caught fire and burned, there is a possibility that there was still a spark in the lantern. I really like this animation and have watched it many times, but I still wondered about this part, so I posted it here. If there's something I don't know or have any other guesses, please leave a comment. I'll appreciate your participation.

User contributions for Neko1998 | Over the Garden Wall Wiki | Fandom@getfandom 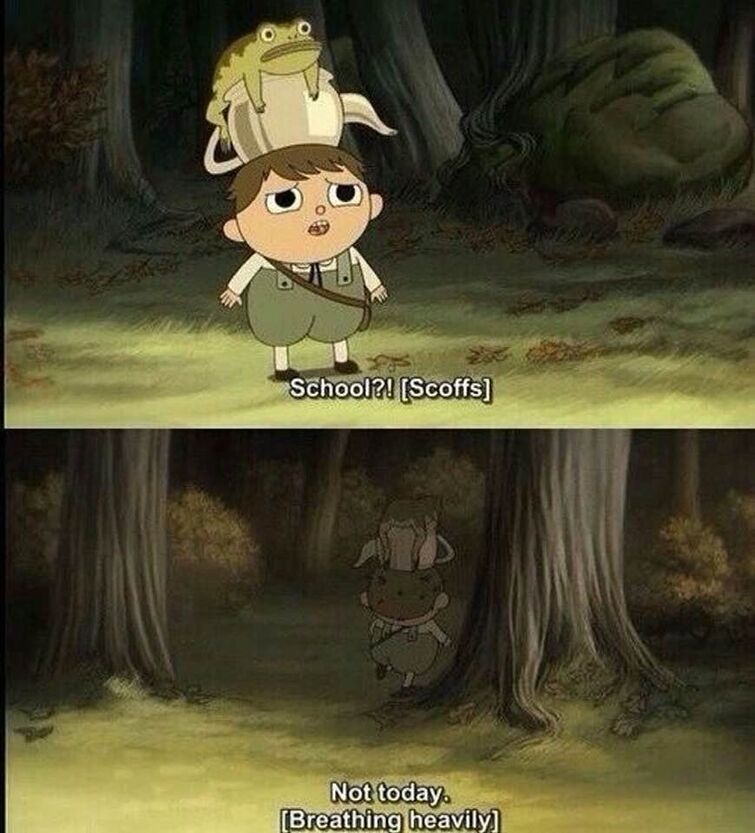 Is there any specific eutectic I should use while posting? The creepypasta wiki is a mess of fairly strict rules and... Yeah, I'm just curious considering this looks to be a smaller wiki.

Hey guy's since this forum is an older one we're gonna see more changes happening; I say this with this in mind, I'm sure you've seen this message pop up and became concerned:

"This community has been migrated from Special:Forum to Discussions as part of our announced plan to retire our old Forums system. All of your existing Forums content has been moved over to Discussions."

But false alarm, here's some news from the guide:

Your account rights will be respected. We may have to make some slight changes to the rights themselves, like names or exact permissions, but you will have the equivalent of your current rights on the new platform.

Gregory seems to have some paranormal abilities, such as truesight (he was suspicious of the witch's shack, and Lorna from the beginning), Conjuring (he only grabs like 5 or so leaves for a blanket but he suddenly has like 20 for both he and Wirt) and he was able to travel to cloud city.

Also, I noticed that Jason seems to be able to do complicated un-frog-like tasks such as singing in English and he seems to mirror the spirits of Greg, that combined with the woodsman's advice about naming the frog and it seems to hold water.

It could apply to Wirt as well given how they describe Jason as "Our Frog" and Jason seems to like Wirt well enough, not to mention that wit's revelation about the lantern is illustrated sith a ringing of a bell (much like the one inside of Jason).

(edited by Figwit2112)
The beast is Mary Poppins
(edited by ChevalierMacabre)

So I don’t think langtree is given a first name, right? Well I’ve got a theory on what it could be: Elizabeth Alright, Elizabeth sounds like the name that someone would give her in a bad fanfic but hear me out, in lady and the tramp Jim dear’s name was Jim brown (We’ve all heard jimmy brown) in the pre-productions and darling’s (Jimmy calls langtree darling) name was Elizabeth.

(edited by We are here to burgle your turts)

I love the final moments where the Woodsman realized where the trees come from, but its always been slightly undercut for me by the following exchange from episode 7:

Woodsman to the Children:

THE BEAST KNOWS YOUR PRESENCE!
READY TO CLAIM YOU AS PART OF
HIS DARK FOREST, BUT ONLY IF YOU
GIVE UP!
KEEP HEARTY IN BOTH BODY AND
SPIRIT AND YOU SHALL BE SAFE
FROM HIM.
FALL ILL OR LOSE HOPE AND YOUR
LIFE SHALL PASS INTO HIS CROOKED
HANDS.
UGH! CHILDREN!
PLEASE, HEED MY WARNING!
BOYS, BEWARE THE BEAST!

Later, with the beast:

How can he truly claim he didn't know in the final episode when this kind of stuff is going on between the two? I'd love it if there was something I was overlooking here that could keep the Woodsman in the dark, if you have ideas I'd really appreciate them!

I wasn't exactly sure about how the Woodsman's daughter was at his house the whole time? Was he just overly concerned about the lantern, or is there more to it?

Hey,  we just created a new OtGWfandom community on the app Amino. We hope you check it out!

Here are some pictures. One shows the front page and the other one shows an example of a blog post. 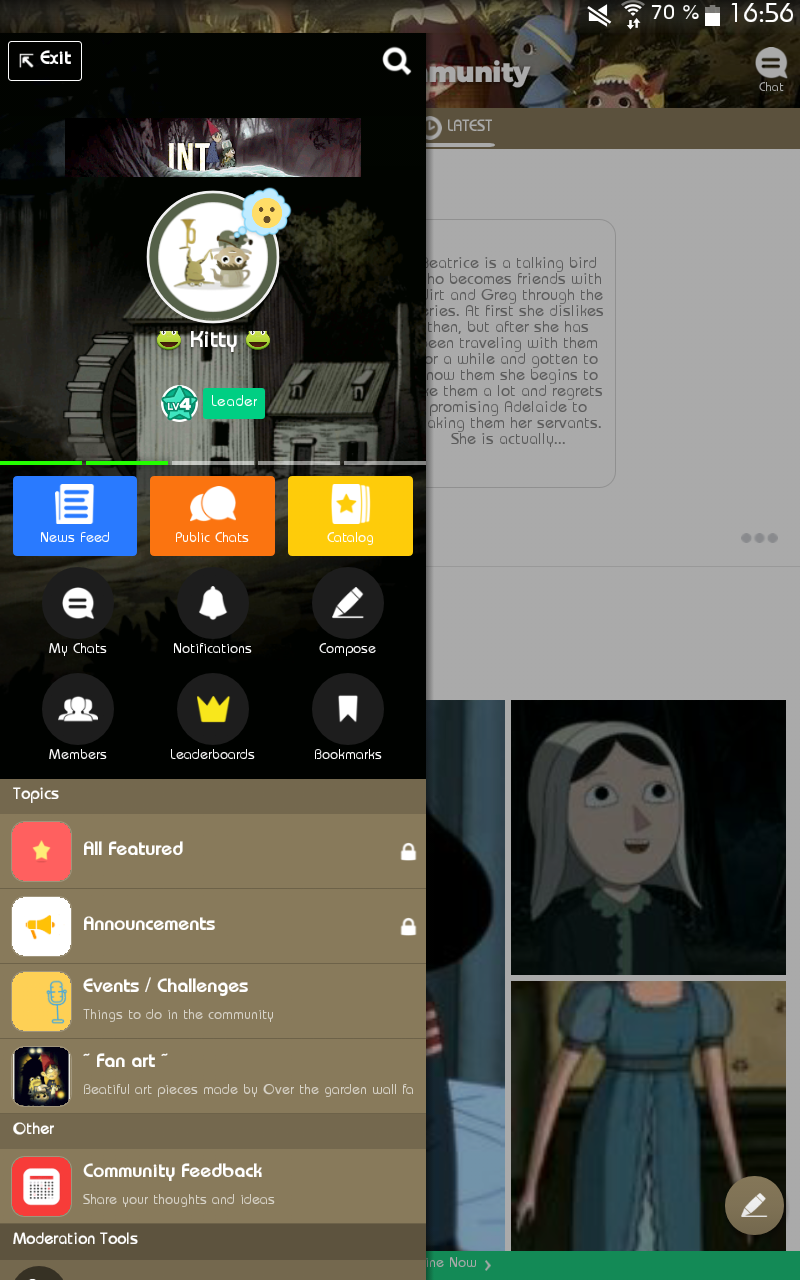 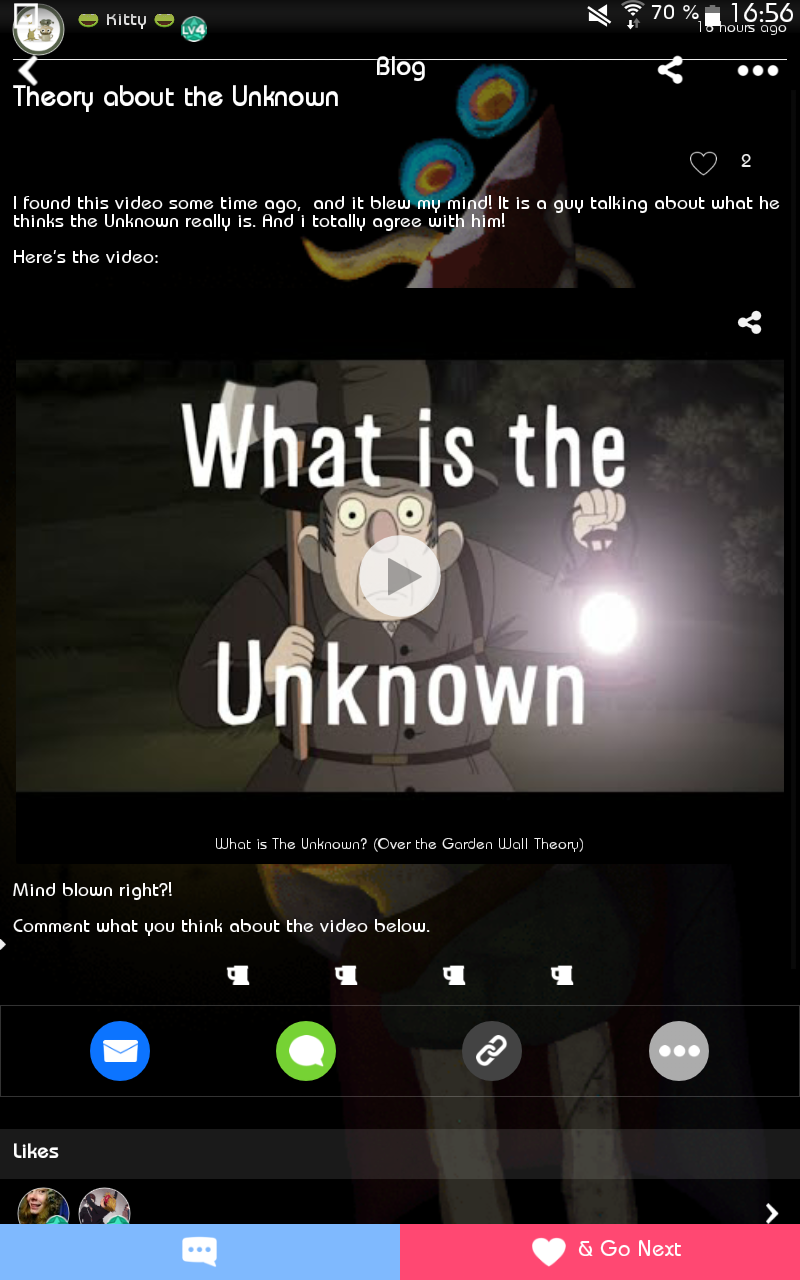 (edited by Mims and Penny)

The beast said lost souls and keep saying lost souls of kids, the 'trees are souls', and was going to turn the kids body into another tree, but it is made of souls... To be more exactly: 'lost souls of children who have wandered far from home'

Does that means that the kids are actually only theirs souls and theirs bodies are still alive in the river?

So the beast is like/a demon collecting lost souls and turning them into trees, using the people that lives in here to make oil for it. So the forest are all the souls of lost kids, the only way to go back to the river could be defeating the Beast, because all those trees are the ones that tried to go back home and gave up... The people living here must have forgot theirs home and decide to make the Unknown their home. Maybe the Unknown is Limbo and if someone stay in here for too long is too late to go back and they forget about the other world.

The people from the Unknown doesn't really use logic, maybe because the Beast make sure they can't think of a way to be a threat? Because no one thought about the forest and the Edelwood really come from, they really don't think in a very logic way... Like Auntie Whispers 'using the bell without trying to get the spirit out of Lorna only controlling it when she knew she could control it, Beatrice throwing a rock on a blue bird because she was angry.... 'Adelaide actually having a windows that could be easily opened by a ble bird... You know instead of locking it.

And the very suspicious Black Turtles, too many of them and the first episode.... They will never make me rally trust them... Because the Beast watched them from afar without being noticed.... The beast know that was going on.... The Turtles are almost on every episode, all the times the Beast showed up, but in the first episode.... Thye turtle was fully black while the Turtles that Antie Whisper eats aren't really black, nor they are fully black, like in Episode 1, 3, 4.

Here's a fun game: ban the person who comments above you for some reason, absurd, random, or actual. You can also ban yourself or other users besides the person above you.

There are very little rules, but please don't double post.

I'll start: I ban myself for copying this off of Undertale wiki.

Here is the Clarence theory, in the last episode of over the garden wall you see the town Wirt, Greg and others live in. You see this town again numerous times in another Cartoon Network show Clarence. So is is saying that Clarence and Wirt and Greg live in the same city. Another thing backing my theory up I just saw a video of Wirt in Greg making a cameo in Clarence it is in the episode lil buddy, Clarence is in the forest and you can see shadows of what appear to be Wirt and Greg. What do you think?

SPOILERS! In the end of the final episode (of season one), we are briefly shown what "The Beast" in silohuette appears as a Wendigo, but when the lantern shines on him, he looks a bit like a Elelwood trees, with faces in agony twisted.

But! when it is revealed that Greg stole the Rock, the one used for "Rock Facts", and we get a nice look at the face upon the rock; what no one appears to have mentioned, is how very similar The Beast's eyes (seen with color, this time) are to the Rock's eyes. I believe we are meant to draw a connection between the sin of stealing the rock, and the Beast, their eyes!

[Note: the eyes are only vaguely similar; I wonder if anyone will see this?]
(edited by Tachikomas)

WARNING-this discussion is for mature fans and will not talerate any negative or foul opinions any opinions otherwise will be deleted.

(edited by The Commenter Dragon)
I am looking foward to the new comics but I have no idea when they will be released. Does anyone know this?
(edited by Be More89)

I feel really bad that this wiki has become basically abandoned. Unless a new series is released on Over the Garden Wall ( which I hope one isn't ), because of the very short run of episodes, the wiki will continue to be uneventful. I guess the short amount of episodes is what made the series so great.

Sure, you have the occasional edit, but it's not the same as a diverse, thriving community.

Help us grow Over the Garden Wall Wiki