Over the Garden Wall Wiki
Register
Don't have an account?
Sign In
Advertisement
in: A to Z, Locations

Adelaide's house is a location that appears in Over the Garden Wall. It is a small brick hut where Adelaide spends her time sewing.

She lays in a large bed draped with one of the quilts she presumably made. The walls of her house are also covered in quilts that she probably sewed herself. It can be made airtight at night to prevent Adelaide from perishing.

The front of this house is made of stones covered in vines. The front door for this house is made of wood with a cast iron handle and latches. There is a singular window and chimney. The house is draped with multicolored threads placed in certain manners, as shown when Gregory and Wirt were captured with a single tug of a thread. On the left of the house is a chimney which Beatrice uses to gain access to the house. Beatrice opened a window in the back of this house to let in the night air in order to cause Adelaide to perish. 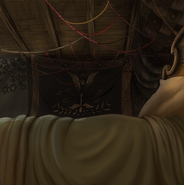