Over the Garden Wall Wiki
Register
Don't have an account?
Sign In
Advertisement
in: A to Z, Locations, Comics

"If you saved them from an avalanche, the fountain makers' guild should've given you a gold rock."

—Greg to Hero Frog, during Tour of the Village[1].

The Village of Frogville, or as it is later referred to, Hero Town, is a village that Wirt, Greg, and Sara encounter in the Unknown. It is closest to the town where the Old Man of The Mountain[2] lives.

The village has different styles of homes and establishments, but some appear to resemble Dutch Colonial Homes others have colonial timber styles. Hero Frog appears to live in a Greek Rival style mansion.

During Greg and Jason Funderburker's search for the frog in the portrait, known as Hero Frog, they encounter many creatures that explain to them issues with bandits. Specifically, rogue pirate frogs that steal candy, desserts, and all sugar-based treats. No one was able to catch them until Greg, Jason Funderburker, Wirt, Sara, and help in the form of other creatures they befriended, arrive in Frogville. Where, Wirt, to Greg's initial disbelief, suspects that Hero Frog is not a hero at all, and is associated with the bandits. It comes to know surprise that, the many pirate-themed frogs in town, storing desserts in the storage, and that are wary of Greg and Jason Funderburker are in fact the same pirate bandits. All whom are loyal to Hero Frog, the leader of the town. It is not until Greg and Jason witness 'Hero Frog' (Jason Funderburker's Father) changing back into his position of the pirates leader, Pirate Croaker, that Greg understands that all the treats in town are stolen from other people and communities.

He is eventually run out of town by Greg, Wirt, and Sara, leaving the frog inhabitants to come to terms with their loses. 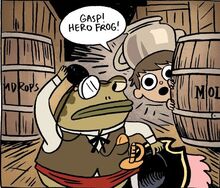