Over the Garden Wall Wiki
Register
Don't have an account?
Sign In
Advertisement
in: A to Z, Locations

Pottsfield is a location that appears in "Hard Times at the Huskin' Bee." The town is inhabited by pumpkin people who are later revealed to be skeletons with vegetables as clothing and pumpkins as heads. The leader of Pottsfield is Enoch, a giant pumpkin creature, who uses his powers to punish ones who do wrong to the village.

The people of Pottsfield live in normal looking houses and seem to have large turkeys rather than horses to pull carts and wagons.

Pottsfield is surrounded by farmland that is growing corn, pumpkins and wheat. These fields are maintained by the citizens of Pottsfield. In the fields are several sheds and trails for the wagons. A basic fence is found on both sides of the trail that leads from the woods to Pottsfield. 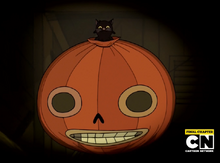