Over the Garden Wall Wiki
Register
Don't have an account?
Sign In
Advertisement
in: Tome of the Unknown, Episodes

Tome of the Unknown 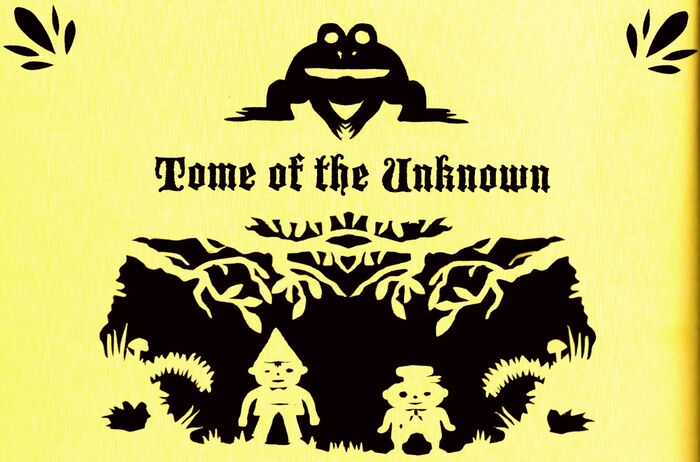 "As the brothers strive to live out their story and find their way home, they interact with all the characters and stories included within the Woodsman's Tome of the Unknown..From the skinless witch who kidnaps people while they sleep...to the citizens of Frogland, who work along the river and talk with spit bubbles...to the terrible Mr. Whittles, who uses children's bones for his "ivory" carvings...etc., etc."[1] — From Art of Over the Garden Wall.

Tome of the Unknown is from Cartoon Network Studios’ shorts program and won the best animation short film at the Santa Barbara International Film Festival in February 2014. It is written and directed by Patrick McHale, who is also known for working on Cartoon Network's Adventure Time. The pilot episode aired in film festivals such as LA Shorts Fest and Ottawa in September 2013, and at Austin Film Fest in October 2013. On May 19, 2015 the pilot episode released on Cartoon Network.com.

"ONCE there were two brothers named Wirt [Walter] and Gregory. One Halloween night they accidentally took a ride on little black train. They soon realized the train was headed straight for the afterlife, so they jumped off halfway.

Lost in the dark forest between life and death, they met the wise old Woodsman, who showed them a mysterious book detailing all of their future experiences in this strange place called "the Unknown." The only way for Wirt and Greg to escape, he explained, was for them to live out all the stories contained in the tome...otherwise they would be trapped forever in the Unknown forever.

Now, with the help of the Woodsman and a bluebird named Beatrice, Wirt and Greg must travel across the land completing each chapter of their story until they find their way home."[1]

***During the planning stages for Tome of the Unknown, McHale states that the Unknown was originally called the "in-Between".

Wirt, his brother Gregory, and Greg's frog travel alongside a bluebird named Beatrice in search of a book known as, "The Tome of the Unknown." The book is described as containing all that has ever been forgotten.

When the group of heroes grow tired of walking, Gregory suggests finding a goose to ride. However, Gregory finds a car belonging to a romantic songster made of vegetables. The vegetable man, named John Crops, dreams of traveling to the Big City and finding a gal who will love him and put an end to his loneliness. Therefore, Wirt drives to the city in John Crop's vegetable car in hopes that Gregory, Beatrice, and himself can keep the car if John finds his soulmate in the city. As the gang is traveling in the vegetable car to the city, a horde of crows attacks them which leads the car to veer off of the road into a crop field. While Wirt and Beatrice fix the vegetable car, Greg walks along with John to the city where John meets the Cabbage Gal, who seems to take a liking to him. However, when Wirt knocks down a scarecrow, the crows attack once again, wreaking havoc in the city. Fortunately, Greg scares them away by letting out a loud scream. Wirt is deeply concerned, thinking that his brother could have been hurt, but it turns out that he yelled because he found a large goose that they can ride on, as he suggested to them earlier in the chapter. John Crops then moves out into the country with his new gal while Wirt, Gregory, Beatrice, and Greg's frog continue their journey, on the goose, further into the unknown.

[1] Art of Over the Garden Wall; The Unknown, Tome of the Unknown.